Three of our web projects produced in flash can therefore only be presented to you as recoded HTML5 videos: 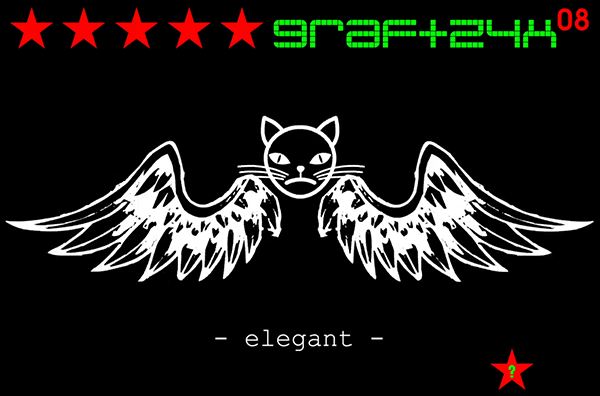 Different artistic approaches to digital production are synthesised in the Flash animation “Poor Cat” (1982–2008), an audiovisual and interlinked webclip.

On the mechanics of the clip:
A comix-like graphic design and text-adapted rhythms make up the storyline – the “lyrix” of the song: Next to music it is the composition and repetition of a minimised symbolism of signs and characters which constitute the clip’s individual visual structure. The primary – rather poetical – narrative level is emotionally broken and disrupted in content by a second controversial communication level. The audiovisual storyline – the personal message – a combination of sign/body/text/image/drawing/symbol/voice is confronted with a conceptional media-theoretical examination. Statement, formal design, and composition of the audiovisual narrative are subversively criticised and satirised. It is the clip’s dynamic visual and interactive assurance which prompts the viewer to leave the actual storyline, and refers to more interesting issues and sites (a whole universe).

The clip’s script and directives:
POOR CAT – the prodigious shift of an artistic perspective
a path to art
variations on self-referential systems
no philosophical theory?
only emptiness and abstractness
no political truth?
only mathematical structure
not socially relevant?
only a synaesthetic continuum
a visual experience only?
elegant
charming
precise
exciting – spectacular
not corrupt?
not élitist?
a little song
too simple?
too few action?
a short movie
a blue sky
less action?
analogy : contrast
only a memory of friendship
almost like real life
tricky world
a metaphor for the dreaming social mind
not visionary enough?
then
they choose amok
the story of a voyage into the anonymity of empty space
tableau [1] Japan one
tableau [2] cluster of panic
tableau [3] museum of private arts
tableau [4] the sleeper
tableau [5] translocation
a whole universe?
choose amok
or stay!
amok – fast server live in the spirit of deconstruction
poor cat
1982–2008
interested in another space?
if it?
do it
now!
click!
missed!

dedicated to our friends

»i-f.it« is the logbook of an investigative voyage into the space of utopian visions, in which the original material mutates into astonishing combinations through fusion of a calculated chance subject to strictly serial parameters. It is the linking of an analogue, electronic and digital world which directs the momentary »Augen-Blick« – in the very moment of highest perplexity – to what is hidden beyond the obvious.

»i-f.it« is also a game playing with strong contrasts. Only a few artistic interventions such as the insertion of some areas filled with the non-colour black turn the »white cube«, the empty space of art, into a minimised stage play, a role play of particular nature:
Stripes dance, eyes roll, digits live – checkmate!
The players of the game themselves are pieces of a subordinate game. Thus, a small, complicated, and complex world with the prospect of infinity emerges in front of and behind the monitor screen.

GRAF+ZYX play chess. Accompanied by music of GRAF+ZYX, composed, written, arranged, played, vocalised, and produced by GRAF+ZYX. While GRAF+ZYX themselves become pieces in a game of chess. A production by GRAF+ZYX. In an environment designed, arranged, and realised by GRAF+ZYX. GRAF+ZYX film themselves while playing said simulated game of chess with the future prospective to cut the filmed material together with the graphical material, photographed, developed, enlarged, graphically reworked, and animated by GRAF+ZYX, to the rhythm of GRAF+ZYX. And at the time when GRAF+ZYX sit in front of the monitor and relish the video clip by GRAF+ZYX in an ambience designed and built by GRAF+ZYX themselves – who then could possibly still claim, that virtual worlds and avatars are only an invention of the internet age.
© GRAF+ZYX, tamara star|R|
(translation: Simone von der Geest) 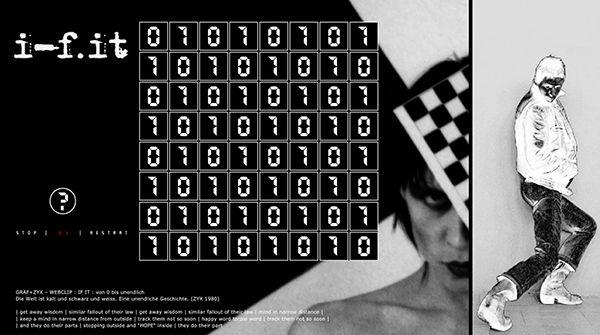 was originally conceived as a constantly expanding collection of selected Flash-based animation works optimised for the Internet. Flash was soon after no longer updated by Adobe and then finally discontinued and so None Are Strangers has remained the only contribution included in this collection.
It is a transformation of the dance performance by Liz King’s Tanztheater Wien, performed in 1998 at the Odeon in Vienna, concentrated on our electronic stage design and underlaid with our music.
You can find all the details here.